A picture is worth a thousand words… 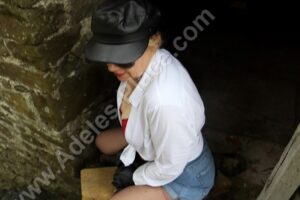 I’m not sure I’ve ever laughed as much on a shoot as I did with the lovely Xphoto on location a couple of weeks ago.  The photos are fabulous and I thought you might like a giggle about the predicaments we found ourselves in.

We were a motley crew of:

Not one to miss out on the opportunity for a short break away I decided an overnight stay in the area the night before was in order.  It was beautiful, and well worth the trip out.

So the morning of the shoot arrived, and it was the stuff of spy films.  The rendezvous with a discreet meet in a public place at the coordinates previously agreed.  Bags were speedily loaded from one vehicle into another and off we headed to a secluded location via winding country lanes before arriving at an almost hidden entrance to then proceed off road.  From this point onwards we were hidden from the world.  The paranoid side of me (AKA wimp) did ponder the thought that I may never be seen again and no-one would even know where I was.  With almost a hysterical laugh I put the thought to the back of my mind as my photographer expertly negotiated the terrain deeper into the unknown until we arrived at our destination which was breath taking as an unexpected oasis opened up.

After scouting out the site and selecting the best advantage points the fun began.

Outfit changes galore, I slipped from hard hat and steelies to denim to cotton to pvc to tweed, to wellies to very little at all lol.

Important things I learned in the photoshoot were:

Despite of/because of the above we are planning on another collaboration – I’m eyeing up the uprooted tree and trying to think of a theme around it.

Jesting aside if there are any adult industry professionals who want more details of Xphoto visit her website www.xphotography.co.uk.